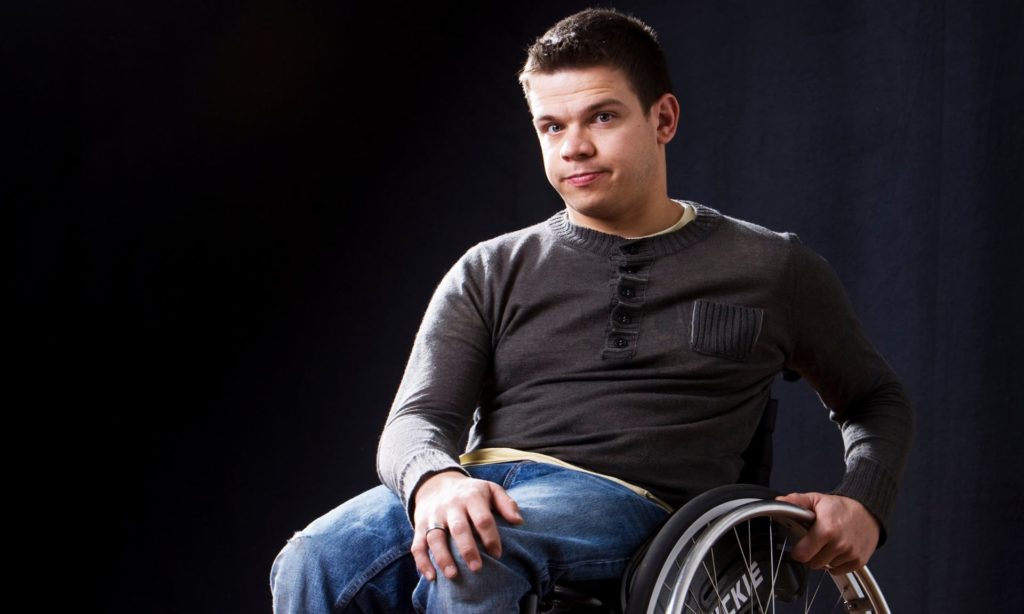 Robert is an established figure in the Scottish arts scene, with over ten years of experience in diverse roles including disability rights activist, actor and performer, writer, artistic director and advocate of equality of access to the arts for disabled people. Studying business and management at Glasgow university, at 21 Gale was offered a one year acting contract in Edinburgh. Since then Gale has been pursuing any available opportunity saying “What are the options… you either go out and do the things you want to do or you don’t. My attitude has always been, ‘How do I make this happen?’”

Gale has appeared in many productions and has developed his own artistic practice – including instigating, co-writing and performing in Girl X for the National Theatre of Scotland, directed by Pol Heyvaert of Belgium’s Campo. Gale’s award-winning writing debut and solo performance – If These Spasms Could Speak – was a hit of the 2013 Made in Scotland programme and has subsequently toured internationally throughout Europe and further to countries including Brazil and India. Gale also wrote and directed My Left/Right Foot proving to be a big hit in the 2018 Edinburgh Fringe Festival.

Gale joined Birds of Paradise (BOP) as Artistic Director in November 2012. Since joining in 2012, Gale has strived to produce high quality performances under BOP saying “If the work isn’t as good as it possibly can be, we lose the argument before it’s begun. If we’re asking people to engage with inclusion, then unless we’re making great work they’ll think: ‘Why should we?’” As a performer, he has also appeared in BOP shows, most recently Blanche & Butch, which he also wrote, and The Tin Soldier. Gale’s current production Purposeless Movements is a dance-theatre piece in which he turns the involuntary gestures of cerebral palsy into choreography.

Gale is not only a prolific performer, writing and producer bust has been extensively involved in disability campaigning within the arts in Scotland. In 2005, Gale ran Agent of Change, a yearlong campaign for BOP investigated barriers to mainstream theatre becoming more inclusive. Gale then two years as arts disability officer with the Scottish Arts Council whilst also co-founding a company named Flip, which was aimed at promoting and developing inclusivity among theatre companies.