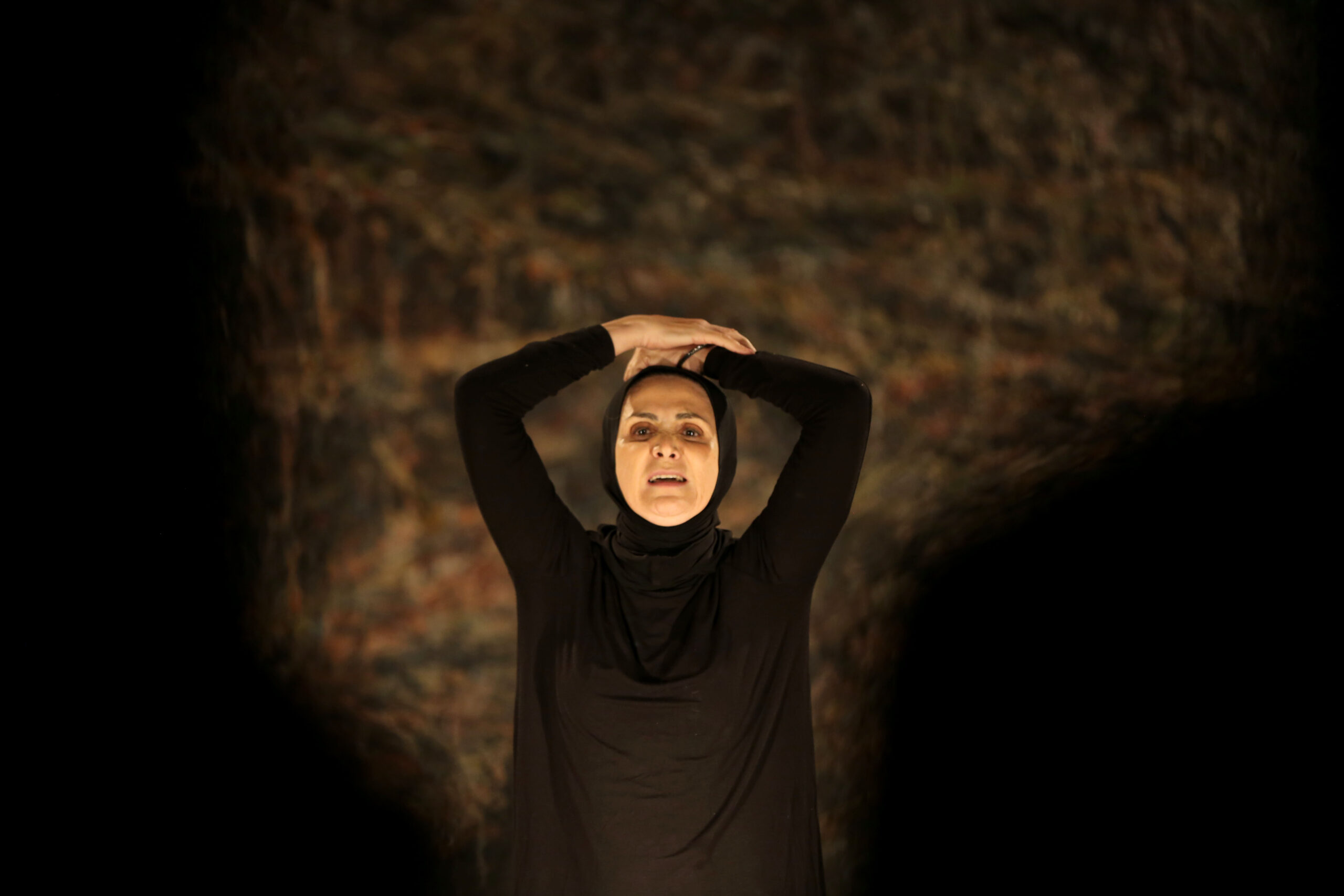 “Who is Medea today in a torn city like Beirut?”
― Hanane, in Jogging.

The public performance of this play will take place at the Stadsschouwburg Utrecht and in Het Nationale Theater in The Hague. We are offering the show to universities around the Netherlands to book it for their campuses between 25 March and 4 April 2022.

Hanane Hajj Ali is many women. She is a Lebanese actor and a playwright. A feminist and a political activist. A mother and a wife. In her play Jogging: Theatre in Progress, a humorous, revealing and finally dark performance, she inhabits four women: herself; the Medea of Ancient Greek myth and Euripides’s tragedy; and two contemporary Lebanese women, one who kills her children and herself, and another who sacrifices her children to the wars of the Middle East. The exploration of Medea’s motivations is a central theme.

Hajj Ali asks herself, “Who is Medea today in a torn city like Beirut? If the age of tragedy as a type of theatre is gone, why do I smell catastrophe every time I run on the streets of Beirut?”

The intense thoughts she had jogging through Beirut developed into this stunning show, in which she also jogs. It is “theatre in progress” as she calls it. The stories unfold like conscious realizations. From the central space she connects the audience and the actor, with great originality and without restraint.

This play has been performed in refugee camps and artists’ studios, and recently even in the streets. Notably also at the Kennedy Center for the Performing Arts and the Edinburgh Fringe Festival, where Hajj Ali received the Vertebra Award for Best Actor.

“JOGGING transgresses the Lebanese Bermuda triangle of taboos: religion, politics, and sex, and presents a radical challenge to the stereotypes and prejudices that afflict global perceptions of Arab women. Telling the “unspoken stories” while citizens’ voices are being silenced especially those of women and artists echoes with the thirst to regain basic human rights, and contributes in shifting perspectives of thinking, thereby generating a critical reception of the work, so that the Still Waters of stagnant perception modes are stirred.” – Hanane Hajj Ali

Hanane Hajj Ali is a Lebanese playwright/performer, who travels from her home country, where she still lives, to perform powerful theatre around the world. A private and public risk-taker, she expresses feelings about the political culture in Lebanon, which is impacted by years of war. In a country traditionally reticent to give women prominent positions, she decided to be a woman in her own right. Driven by the instinct to play theatre, she started her journey to create and perform in a way that would break boundaries. As a woman she is a leader in Lebanese theatre and was recently awarded the LPTW (League of Professional Theatre Women) Gilder/Coigney International Theatre Award for her contribution to local and world political and cultural awareness.

Take a look at the trailer of the show

Book your tickets
Go to Top
Skip to content