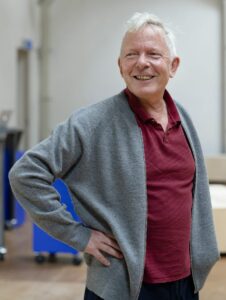 He graduated in 1976 from the Arnhem Theater School. The first two years he played a lot in film and television productions, the most famous of which was “Oorlog’s winter”, in which he played the role of Michiel van Beusekom. He then opted for the stage, including with De Noorder Compagnie, and worked for 10 years at the Ro Theater, where he played in Tartuffe, Pinocchio, De opera van Smyrna and Merlijn, among others. For three years he was also a member of the artistic direction of the Ro Theater.

Theater Babel
Theater Babel Rotterdam is an inclusive theater company. That means they don’t exclude anyone. They work with professional actors who are young and old, with and without disabilities, rich and poor, sick and healthy, addicted and non-addicted, with different origins, religions and sexual preferences. People who are different from you and sometimes are yourself.