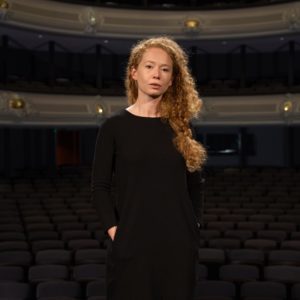 Annemarie de Bruijn is an actress and director who works from the city of The Hague, The Netherlands. Besides acting and producing theatre shows (Lady M, The Impromptus, Cassandra, Lost in Denmark, De Dansende Madonna, Monet en de Blauwe Engel) within her own company ‘Het Vijfde Bedrijf’, she is an active freelance director and teacher. The productions of ’Het Vijfde Bedrijf’ all cast a different light on well-known people or theatre character. A lot is based on Shakespeare and has been performed in and outside of The Netherlands. In 2016  ‘Monologues, not by Shakespeare.’ was published, in Dutch and English, and in 2017 she attended the Month long intensive actors training at Shakespeare&Company in Massachusetts, USA.