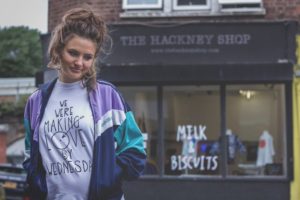 British born Paloma Oakenfold trained for three years at the Guildhall school of music and drama before training in Theatre Directing at Birbeck University. Since 2010, Paloma has worked extensively as a performer and director in film, TV and theatre across the UK. In 2014, Paloma co-founded the all-female theatre company What’s Her Face. Inspired by a desire to break through the male dominated performance industry, Paloma directed What’s Her Face’s first performance titled Out of Order.

With Lyric Hammersmith, Paloma wrote and directed the powerful play STUD. Stemming from roundtable discussions with LGBTQ+ youth the play offered a poignant exploration of gender and sexuality in the distinctly masculine world of football. More recently, Paloma has joined as director for the BareFace collective.