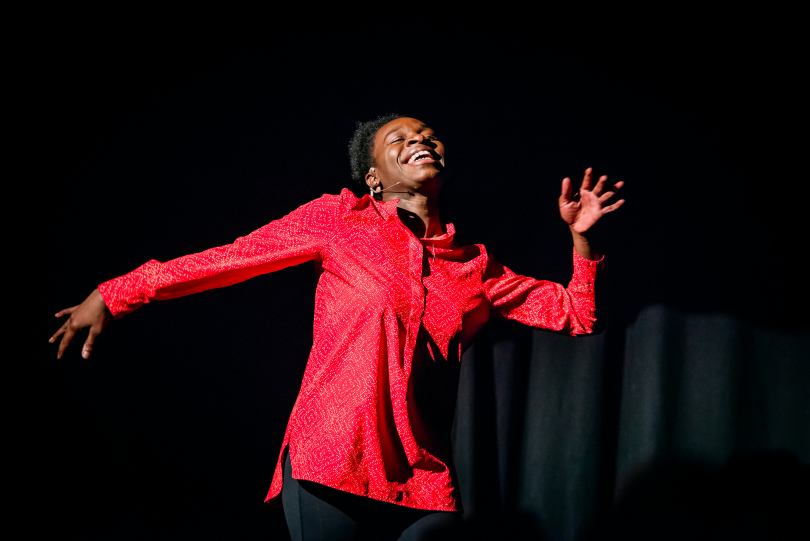 by Apphia Campbell
and Meredith Yarbrough

“I wanted to make a piece that transcends race and focuses on the root of the problem: the system”
Apphia Campbell

Don’t miss this award-winning theatre performance by Apphia Campbell that follows two women’s fight for civil rights. One is notorious Black Panther, Assata Shakur wrongly convicted of murder in the late seventies; the other, a present-day university student, Ambrosia, enrolling as the Ferguson riots begin (2014). This is when the Black Lives Matter movement became nationally recognised following the death of youngster Michael Brown in Ferguson.

Set against a powerful soundtrack of original music and traditional gospel and blues sung live, the two women challenge the American justice system, become criminalised through political activism, and ultimately are faced with the same choice: stay and fight, or flee?

Woke won the coveted Scotsman Fringe First Award for its premiere season, and was highly commended by the judges of the Amnesty Freedom of Expression Award. (2017)

Apphia Campbell is the creator of the hit show Black is the Color of My Voice, which toured to sold-out audiences in Shanghai, New York, the UK and at Edinburgh Fringe Festival.

Korte Voorhout 3, 2511 CW The Hague (click on the address for directions)
10 mins walk from The Hague Central Station
Trams from CS 9, 16 and 17
By car: Parking under Toernooiveld

Let your students tell the stories that they care about and the way only they can. In this practical workshop, participants will learn how to utilise their own special skills to create their own stories. Apphia will share examples from her own practice as a performer and encourage your students to dare!
At your school, or a location you provide

Woke in the Press

“Campbell is the most powerful voice of Fringe
★★★★ The Scotsman

“Inspiring! A fast and exciting play that ended with most of the audience standing and applauding”.
★★★★★ British Theatre Guide

Both Roles are brilliantly performed by Apphia herself.
★★★★★ BritishTheatre.Com