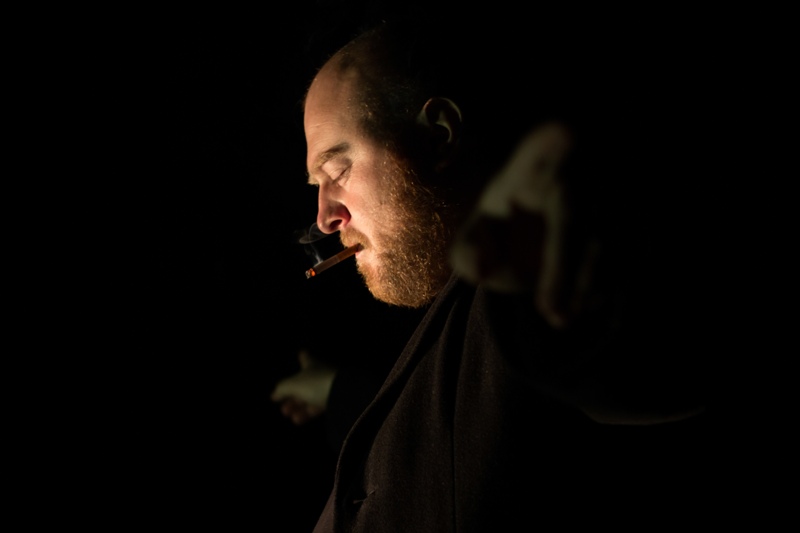 Medea, as you’ve never seen it before

GREAT REVIEW ANOTHER MEDEA JUST IN!!
His performance was a measured, and ultimately chilling, tour de force. His depiction of Marcus, after the breakdown, describing his evil deeds into a microphone sitting at a table (in court?) was compelling and mesmerising. ….a performance, the memory of which will linger for some time.
Michael Hasted Arts Talk Magazine

…a perfectly structured play that takes you on an incredible ride, all told by one man..
(Peter – NYC 2015)

For someone who murdered his own children, Marcus is really rather charming. Aggrieved, yes, and determined to tell his side of things, but not bad company. He understands that he’s committed a horror. “But horrific things do happen in real life, and I think that’s the important thing to remember here,” he says.  (Review Laura Collin-Hughes NY TIMES 2015)

The incarcerated charismatic and enigmatic New York actor Marcus Sharp, recounts in gruesome detail how his obsessions with a wealthy doctor, Jason, and the myth of Medea lead to horrific, unspeakable events. The battle between Medea and Jason has been told and retold, but never quite like this.

A strong and disturbing play by American playwright Aaron Mark. Directed by David Geysen in a scenography by Vassilis Apostolatos. Produced by STET The English Theatre.

This production is part of a four year cycle of Medea adaptations, which started in November 2016 with a highly succesfull run of the original play Medea by Euripides (431BC). It was performed by Athens’ based theatrecompany SKEPSIS.

David Geysen, (Antwerp 1975), is a well known Belgian-Dutch director, actor and nominee for several awards like the Publieks theaterprijs 2011 and for best director KNK 2011. After his graduation from the Maastricht Drama Academy, David worked for 16 years with De Appel TC in The Hague, both as a director and actor.  He directed and performed Hamlet at the Appel theatre (2016) before the Appel closed down in The Hague. Together with Carl Beukman he recently set up Label Dégradé , a new theatre collective. Dégradé’s production Motel Detroit  toured internationally and received rave reviews. (Buckle up, it’s a hell of a ride – NY Times  2016 *****) Dégradé’s newest production, Belgium opens 22 September 2017 in Korzo Theatre in The Hague. A tour in the Netherlands will follow in 2017 and 2018.

David works extensively in Belgium, The Netherlands and in South Africa. He directed Annemarie de Bruijn of theatre company Het Vijfde Bedrijf in the very succesful productions Lady M  (2012) and Lost in Denmark (2014). Both plays were featured in the The Hague Shakespeare Festivals 2013 and 2014 of which STET is a founding partner.

Award winning South African actor Albert Pretorius will take on the role of Marcus Sharp in Another Medea. This exciting highly talented actor looks like the perfect choice for this part: undercooled and with great rythm. Albert received for both his acting work on stage and in film numerous awards like best lead actor in Atholl Fugard’s Playland (2015). Most recently he received the Silverskermfees award for best actor (2016) for his part Dirk in the film Johnie is nie dood nie.  He has worked in the Netherlands before (2008 and 2014) in an exchange with the Appeltheater in The Hague and at the Oerol festival on Terschelling (Friesland).
ph: Kretz in Miskien
….. as usual Albert Pretorius steals the show – his Dirk character shows the most emotional change and growth… ***** Review Weekendspecial 4 May 2017 Johny nie Dood nie

Vassilis Apostolatos (Patras 1973) studied Philosophy and Theology in Athens – Greece. He has been working with STET as from 2009 and is now part of the creative team. He co-produced SKEPSIS Medea which opened the Medea cycle in 2016. He works as an independent light and set designer for several theatre companies in Greece, the Netherlands, Belgium and the United Kingdom. He teaches light design at the prestigious Maastricht Drama Academy since 2013. In 2011 and 2013 he followed in New York a Broadway Lighting Master Class at the well known Tisch School of the Arts (NYU).

EDUCATION
9, 10 and 13 November 2017
Another Medea Open Rehearsals
STET Education invites you and your students behind the scenes to see an open rehearsal of our next production, Another Medea. You will have the opportunity to see a work in progress as the professionals prepare