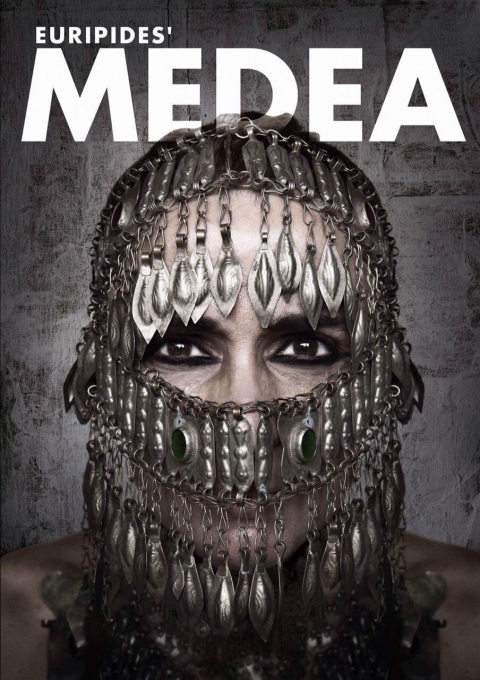 A modern take on one of the darkest classical Greek dramas

NOTE performance will be in Greek, with English surtitles

Euripides (infamous) play Medea will be performed by the SKEPSIS group from Athens. SKEPSIS was created to perform classics in a modern way with a view to highlighting them and connecting the issues raised to today. It follows the classical story of a woman joining her husband in another country, bearing his children to be abondoned for someone higher in the hierarchy of society. The results are known and have been at the core of many a discussion on human relationships and even humanity ever since.

The issues this performance raises are now even more topical than ever. To what evil are people in despair and/or belief driven – we face this at the moment on a daily basis…

From Dimitris Georgalas, artistic director of SKEPSIS and director of Medea:
For the ancient Greeks, God stands above  man and intervenes in his life incited by human weaknesses, but with superhuman powers. For us today,  God and man are perhaps the two sides of the same coin. God is the superpower within us that pushes us to be bright or dark.  Tragedy does not imitate life, it interprets it in its very archetypical form. The theme in ancient Greek tragedy is not whether  a man in ecstasy is capable of  committing such a heinous crime. (although, unfortunately,  reality has proven that this can happen, as well…). The theme of  Greek tragedy is to bring  the MAN-HERO  before the most profound aspect of his own being, at  any cost, and lead him, through passion, to catharsis. Medea bends under the weight of human passions and destiny, the barbarian Love God disfigures her face. Death , in this play, is a symbolic act of last resort and the absolute union with Jason. Euripides does not regard the death of their children as a crime but as the ultimate union of the two heroes. Therefore, at the end,  he sanctifies Medea and does not  judge her as one would expect. Besides, holiness requires divine occupation and  extreme passion. The chariot of the sun at the end of the play exalts the triumph and, at the same time, burns it.

The Need is also a very important concept  in human history. Behind the masks of gods lie the  human needs. It is certainly  the Need that pushes the man to the  desperate act of  crossing a sea, risking his own life (this is the subject of our previous group show “Odyssey, Rhapsody epsilon”). However, this  is not the main topic of Medea,  although the heroine herself is an immigrant who many a time cries for her lost homeland in the play. So it is certain that  there is a strong aspect as such in the show, an unprotected woman, without a home, without relatives,  without a husband anymore, without shelter, decides to do her own justice, create a new order, build a new world within the world that threatens her. To sink into darkness and drag and the  others in it. Our Medea, as far as appearance is concerned, will refer to the figure of an immigrant and is in view of the recent events in France, Turkey, Pakistan and many more countries even more topical than ever before.

Tragedy is for Greece an extreme form of poetry (such as Lorca is for Spain). What it has to say is that the boundaries between the human and super-human are always vague and fragile. It opens vast fields of research on  our existence, but rarely gives us the answers. Our performance, as the performances of our team do in general, aim to  the human soul and every time we try to go deeper and deeper. And this is a good reason to do theater.”